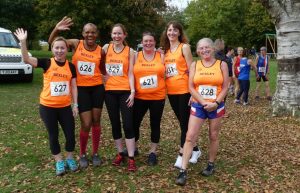 After an absence of 20 months including last years whole season being wiped out due to the pandemic. Cross Country returned last Saturday and the first Kent League fixture took place at Swanley Park.

Bexley was represented in every race. Expert cross country architect Paul Hills had designed a new course around the park. He was accommodating the changes whereby male and female races are now the same distance. 8K had been agreed to be the distance for both the senior races.

Programme began with the U13 girls, we had two runners Aimee Price who had a good run and finished 42nd and Mia Whitwell who finished 49th. Next race was the U13 boys where we had one runner George Ansell, he had problems with his foot and found it tough but still finished in 66th place.

We had one runner in the U15 girls, George’s sister Sophie who had a strong finish in her race and finished 55th. We were well represented in the U15 boys race where all of the boys from Bexley were making their cross country debuts, they were Aryaan Sahota 47th, Frederick Todd 49th, Andrei Anghel 51st and Finn Connolly 53rd and they were the 9th scoring team.

Next up was the U17 girls where our star performer of the day Chi Chi Rae Garland finished strongly to come 3rd. This was her first race as an U17 so bodes well for the rest of the season. Gervace Card was our runner in the U17 boys race and he finished 28th.

The Senior women had to run 8km in their race and first Bexley runner was Alice Burnhope who had a good run and finished 19th. Unfortunately Phoebe Cooper and Rebecca Miah both had to drop out. Steady run from Beata Kubala Todd in 71st, next came Angela Duffy Smart in 81st, Sally Searle making her cross country debut ran very well to finish 89th, then came Kirsty McEwan in 101st. Hannah Buss also doing her first cross country finished 121st and Geraldine Legun who had just had a physio appointment a few hours before the race came 126th. They came 11th in the team competition with the ‘first 3 to score’ and 10th in the ‘6 to score’ team event.

The afternoon was rounded off with the Senior Men’s race. Tonbridge who were not so dominant in the earlier races were clearly dominant in this race at the front. There was a fine run from Joe O’Hara who used his track speed early on to get into the top 10 – he went back slightly but still finished 17th. Damilare Adewale was next in 54th then Simon Wells 62nd, who is still recovering from two marathons in the last month. Luke Francis who is more used to shorter track races finshed 86th. Martin Smith and Jon Fish were next in  95th and 102nd. Then came Matthew Crane in 129th position, he hasn’t done much running recently. Jon Hunter came 154th, Terry Roffey 156th. The next Bexley runner was James Phillips making his cross country debut and he finished 160th. The impressive Bexley turnout continued with Paul Dallison who ran the Munich marathon the weekend before in 204th position, Steve Stewart also running his first cross country for many years 218th, Jim Faulkner 237rd, Chris Gosden 260th and team manager Kevin Winch bravely getting round in 268th place. In the ‘4 to score’ and ’12 to score’ team races we finished 7th in both.

So a good start and we go again this Saturday at Tonbridge.