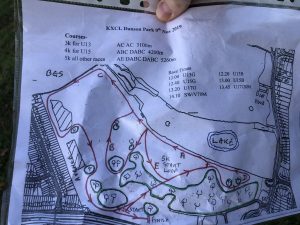 Well it looked a bit confusing when we were setting up the course however it all worked out well and most seemed to enjoy the different course this year. We had Paul Hills to thank for that. He is certainly a dab hand at planning cross country courses.

Thank you to those who helped set up and marshal, particular thanks to Tony Garrett who was a great help all day.

So to the races – we had some good performances particularly Alex Ogilwy in the U13 boys, Jack and Ted Higgins in the U20 men, another consistent run from Chi Chi Rae Garland in the U15 girls and a good showing by Phoebe Cooper in the senior women’s race. 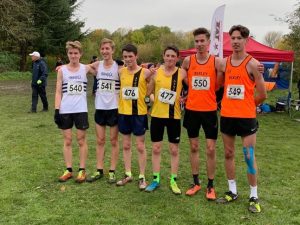 There was an unusual occurrence in the U17/U20 men’s race. The first 6 places in the race were filled by 3 sets of twins. Two from Ashford in the U17 race, two from Tonbridge who were also in the U17 race and Bexley’s Ted and Jack Higgins who were 1st and 2nd in the U20 race.

The first race of the day was the U13 girls and we had 4 runners in this, Rosie Chandler came 42nd, Madeline Dunsmore 45th, Heather Beet 50th and Sophie Ansell 53rd – they finished as 8th team. Next were the U13 boys, this is where Alex Ogilwy finished 11th, Kahya Gediz followed in 43rd, Mark Onanuga 51, Elliot Drayton 57 and Zach McKey 59. They finished as 9th team.

In the U17 women Kacey May Smith came 23rd, and in the U17 men Jaylen Pople having his first race after coming back from injury was 14th , Alfie Green 35th. Ted and Jack Higgins as already mentioned were 1st and 2nd in the U20 men.

The final race of the day was the Senior women and there were 13 Bexley runners. Phoebe Cooper had a good run finishing 24th and 3rd U20. Next was Kirsty McEwan in 59th, Suzannah Sheerin 68th, Vicky Butterworth 72, Beata Kubala Todd 82nd, Angela Duffy Smart 106, Rebecca Miah 117, Christine Pates 138, Paula Cooper 150, Jane Ellis 151, Lisa Smith 156, Sarah Dodds 158 and Geraldine Legon 165, Kirsty Dobberson also ran round but was unable to score as she hadn’t been registered. Our women were 11th team in the 3 to score event and 8th team in the 6 to score team race.

The next Kent League cross country is at Foots Cray Meadows on 14th December, no senior women for this one, before that is the Kent Vets Championships on 30th November at Dartford.

This website uses cookies to improve your experience while you navigate through the website. Out of these, the cookies that are categorized as necessary are stored on your browser as they are essential for the working of basic functionalities of the website. We also use third-party cookies that help us analyze and understand how you use this website. These cookies will be stored in your browser only with your consent. You also have the option to opt-out of these cookies. But opting out of some of these cookies may affect your browsing experience.
Necessary Always Enabled

Any cookies that may not be particularly necessary for the website to function and is used specifically to collect user personal data via analytics, ads, other embedded contents are termed as non-necessary cookies. It is mandatory to procure user consent prior to running these cookies on your website.