Alice Burnhope finished 11th in the senior women’s race, Mitchell Horne competing in his first ever senior men’s cross country finished a very credible 26th. Ted Higgins was 3rd u20 in his race. The men’s team finished 5th team in the 4 to score team event and 6th in the 12 to score. 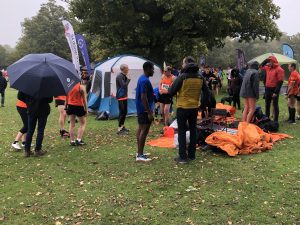 The course at Somerhill Schools is always a testing and a good course, and is well organised. The rain almost held off, unfortunately our tent didn’t survive and was heading towards the start line after a particularly strong gust. 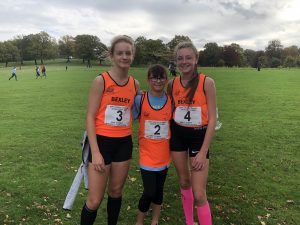 First race as usual for us was the u13 girls although there was a small u11 race earlier on. In the u13’s Rosie Chandler was our first scorer in 41st then Sophie Ansell followed in 55th and Heather Beet in 56th. They were 9th team. Unfortunately we didn’t have any runners in the u13 boys. Next were the u15 girls, we didn’t have Chi Chi she was playing netball, however we did have 5 other runners Jess Sargeant finished 29th, Laurel Broughton 40th, Mollie Bishop 41st and Maya Broughton 44th. They were 7th team. In the u15 boys we had Charlie Gray who ran very well to finish 37th, he had just come from football training so a good effort, Jared Johnson came 48th. Unfortunately 2 runners wasn’t enough to score in the team event. 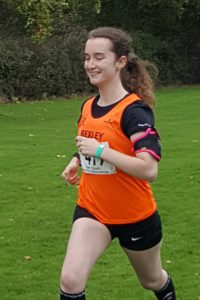 Kacey May Smith was our sole runner in the u17 women and she came 27th. We didn’t have any u17 men or u20 women. Ted Higgins had another consistent run finishing 3rd in the u20 men.

And so to the seniors. In the senior women’s race we had 8 finishers, unfortunately Victoria Croucher was fairly near the front early on but was unable to finish, as mentioned Alice was 11th, Kirsty McEwan running her first Kent League cross country was 56th, Vicky Butterworth 72nd, Angela Duffy Smart also doing her 1st cross country was 96th, all rounder Chris Pates 136, Sarah Dodds 140, Sue Lawrence another 1st timer 141 and Geraldine Legon 147. They were 10th team in the 3 to score and 9th team in the 6 to score team event. 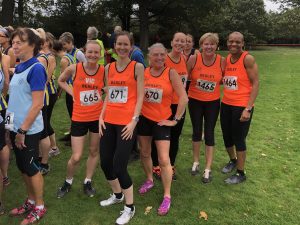 Finally the senior men, as mentioned Mitchell Horne led the way in 26th, Joe O’Hara was next in 34th, then Simon Wells having a good run in 73rd, another consistent run from Paul Collier in 78th and 4th over 50, Mason Kent running his first cross country was 81st, then Damilore Adewale 112, Martin Smith 123, Jon Fish 130, 212 Mark Collier, 214 Jon Hunter, 253 Kevin Winch, 254 Brian Crane, 261 Chris Gosden, 265 Jim Faulkner and 275 Dave Winfield, 15 finishers. In the 4 to score team event Bexley were 5th team ahead of Invicta, Dartford Harriers and Ashford and 6th team in the 12 to score ahead of Cambridge Harriers and Ashford. So a very good team performance.

We are the hosts for the next Kent League cross country on Nov 9th, we need some helpers to set up around 9.00am and marshals needed for around 11.15am, please let Kevin, Richard or Tony know if you can assist.

This website uses cookies to improve your experience while you navigate through the website. Out of these, the cookies that are categorized as necessary are stored on your browser as they are essential for the working of basic functionalities of the website. We also use third-party cookies that help us analyze and understand how you use this website. These cookies will be stored in your browser only with your consent. You also have the option to opt-out of these cookies. But opting out of some of these cookies may affect your browsing experience.
Necessary Always Enabled

Any cookies that may not be particularly necessary for the website to function and is used specifically to collect user personal data via analytics, ads, other embedded contents are termed as non-necessary cookies. It is mandatory to procure user consent prior to running these cookies on your website.